A Profile of Author and Professor Dawn Prince-Hughes 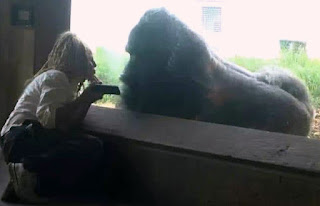 Dawn Prince-Hughes grew up with her grandparents who came from sharecropping families. When she was younger her life was rural. Her family fished and hunted and because of that, to them animals were just commodities. She was always the most sensitive member of her family, so her family’s use of animals deeply upset her. But at the time it seemed like an overwhelming fixture of life, something that could never be changed. She recalls when she was eleven, her parents purchased three steers, which are male cattle primarily used for beef. Dawn made friends with them at a time where she didn’t have any human friends, so they had a special place in her heart. She would lie against them, nap in the sun with them, climb on their offered backs to pick apples to share from high trees, and share sticky cow kisses. This time spent together caused her to forget that the cows were destined for death. At that point her parents decided she and her sister should learn where meat comes from and watch the cows get slaughtered.

After witnessing that, Prince-Hughes was inconsolable for weeks and refused to eat the meat from them. Her mother tried to point out that the only difference between them and store-bought meat is that she had known the three cows. But rather than enticing her to eat them, a lightbulb went on and she stopped eating “beef” altogether. Soon after she had another revelation that the same fate was shared by pigs. She notes that, to their credit, her whole family followed her lead and stopped eating cow and pig as well. Although she admits it took them years to make the chain of connection to chicken and fish, but over time, they all became vegetarian. The family got involved with animal rights and when they found out the dairy and egg industries were just as cruel, they became fully vegan. As Prince became more aware of the reality of the meat, dairy, and egg industries, it merged with her natural affinity for all animals. She was able to reframe how she had always known that animals were sentient, valuable, and deserving of all she had in the efforts to stop their needless suffering.

For Prince-Hughes, going vegan was not a choice she made one day and immediately never ate animal products again. It took her and her family time to give up their addiction to cheese. She recalls that her sister was actually the first to become vegan and she supported Dawn in her efforts. Her sister pushed her to watch undercover footage of what actually happens to animals in the food industry and that’s what finally motivated Prince-Hughes to take the leap. She finally went vegan about a decade ago. In addition to watching films, Dawn’s family also received literature from PETA, and Prince-Hughes had started working with captive gorillas and other zoo animals. She began putting together how horrible captivity was for animals on all levels at that point.

Another aspect of herself that lead her to veganism is that as someone on the autism spectrum, Prince-Hughes is more impervious to cultural conditioning. Growing up, she was bullied badly and gravitated toward animals for friendship. That combination made it easy for her to see that human love and compassion is arbitrary; that animals are sentient, loving, feeling, and self-aware. Logical consistency and integrated morality have always been central to her spiritual and philosophical convictions so the path to compassionate inclusion was an obvious one.

As a public figure and because her global recognition was based on the ways animals guided her into the gifts of her spectrum way of being, it was natural for Prince-Hughes to include their inherent sentience and terrible plight in her writings and lectures. However, more recently she has become vocal about veganism and more active in joining protests, awareness campaigns, and mentoring programs. Dawn recalls an angry phase she went through where she just yelled at the public as a way to encourage veganism. She says that was destructive for her, the people who were intimidated, and the animals’ cause that she was trying to bring awareness to. She says that since she has been more approachable, she has been more successful in helping people make the change. On her strategy to convert people to veganism, she says, “I usually start with pointing out to people that we all agree that animals shouldn’t be harmed unnecessarily. Anyone not agreeing with that right off the bat is a waste of time. But since most everyone does agree with that statement, we work through from that point.”

On the subject of being a public figure, Prince-Hughes emphasizes how social media influenced her integrity in these issues. It supported her convictions, but also challenged her in staying ignorant on more subtle levels, keeping honest with herself, and guided her into being an effective activist. She notes that she personally believes people should be required to confront the realities of their daily choices.

Prince-Hughes sees veganism as the one issue that clearly underscores the intersectionality of all other current issues. These pressing concerns include: human attitudes toward minor physical and mental differences, toward the planet and living things as simple commodities, the rights and well-being of workers and the poor who live in unhealthy food deserts or are forced to take the brutal jobs of killing and dismembering animals literally begging for their lives, the reality of a health care system and shared lifestyle that keeps people sick, and of course climate change. All of these things are connected. Prince-Hughes says that the encouragement of people who make small changes or simply do whatever they are able to should be applauded and encouraged. She believes that when most people make these changes, as their health and clarity of mind improve, they become more open to the enormity and urgency of the problem.

You can find more about Dawn Prince-Hughes on her public Facebook page. A film is currently being made about her book, Songs of the Gorilla Nation, which will be the first time that animals are portrayed as full persons. The film is about her life story and goes into why she made the choices she has through her growing understanding of animal sentience. It will also invite the audience to remember their best, connected selves and to become intersectional in the ways that they care about life.

Subscription Links (Third parties - Sorry, No comments on this site)

Comments
Literary Veganism is an online journal of writing by, for, and about vegans. Go to Latest Posts at Home or to the Contributors tab to find links to vegan writing published here. We've merited inclusion in the Poets & Writers magazine database, thanks to our contributors and readers. ISSN 2690-2621